An innovation and exclusivity ROBIN Pépinières.

An innovative concept and remarkable perspectives for the improvement of truffle production, that's how we can summarize the oak Truffier CHAMPION® of ROBIN Pépinières.

Thanks to our research and development, we can offer you for your truffles, our truffle trees CHAMPION®, designed from good producers specifically selected.
This innovative concept was defined in 1995 by ROBIN Pépinières.

CHAMPION® Truffle Oaks are obtained by vegetative propagation from truffle trees that have demonstrated exceptional truffle production capacities. Vegetative propagation consists of reproducing trees exactly, keeping all their genetic characteristics. (This has nothing to do with GMOs).

The seedlings obtained either by cuttings or by in vitro propagation are then inoculated with Tuber melanosporum and grown in ROBIN ANTI-CHIGNON® cup.

The scientists' point of view

The scientific work has shown a strong genetic variability within the different species of oak (Quercus spp.), Which results in very fluctuating phenotypic characters. All this knowledge has made it possible to formulate the hypothesis that certain characters would have a significant influence on the production of truffles. 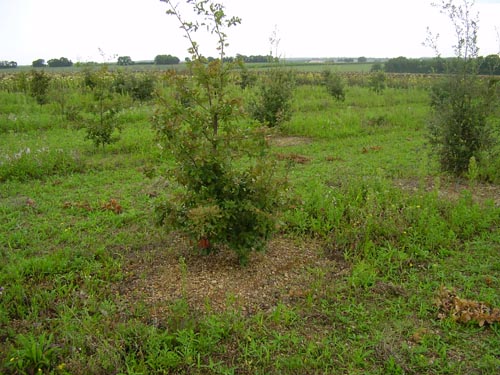 Defined in collaboration with the INRA, it was designed to test the hypothesis of the transmission of certain traits of interest for intergenerational trufficulture, in particular "the heritability of the good producer character".
Several good producing trees have been recognized in different French trufficultural zones after a prospection started in 1995.

Multiplication by non-axenic cuttings of different producing trees led to several clones of pubescent oak and holm oak from 1998 onwards.

A clone is the set of rooted young plants from the same individual by asexual reproduction. These clones are genetically homogeneous and constitute a material of choice. They have nothing to do with GMOs

These CHAMPION® trees allowed the installation of an experimental multi-cloning device on 15 sites corresponding to the diversity of the French natural truffle area.
This experiment is followed by a rigorous and attentive follow-up, the goal of the program which required a considerable effort, is to establish the superiority of the truffle-bearing plants resulting from truffle-rich tree cuttings on the truffle trees. generics produced from seedlings.

The objective and rigorous detailed analysis of the data, each year more important and more significant of the TREE CHAMPION® program of ROBIN nurseries, brings remarkable results, supporting the working hypothesis (Trufficulteur - dec 2007).

On all 15 experimental plots, the vegetative development of the clones is greater than that of the controls (traditional plants derived from seedlings associated with the same fungal partners).
On the majority of plots, the occurrence of very early burns around CHAMPION® trees has been observed.
In several plots, the development of these burns is significantly greater than that observed around the controls.
The most remarkable result concerns the  production of truffles 1st in the 5th winter after planting . This production has grown, so far it is a characteristic of truffle oaks and hazel truffle CHAMPION® installed in several plots.
The experimental device designed to evaluate the concept of ARBRE CHAMPION® according to an irrefutable scientific approach, provides reliable data that establish an undeniable superiority of CHAMPION® TREES.
Truffle oaks and truffle oaks CHAMPION® have many advantages at different levels:

Our CHAMPION® TREES multiplied from good producers are produced under INRA control under the same conditions as the classic truffle plants, and are delivered after control of their mycorhization by INRA.

We only offer truffle and truffle oaks CHAMPION® multiplied from "good producers", in the following species:

For the realization of your truffle do not hesitate to  contact  or contact the  sales representative in your area.

"Super jarjaye" is an exceptional tree that is almost 80 years old. It is located in the municipality of Jarjaye, in the Hautes Alpes at 700m altitude.
It produces exclusively Tuber melanosporum. Its average annual production is between 5 and 8 kg. She even has some years, exceeded 10kg. We raise CHAMPION® truffle oaks in our nurseries, multiplied from this "good producer" tree.